Many years ago I had the rare pleasure of meeting a genuine friend, in Farokh Master, of Mumbay India and the World.  Those of you who share my homeopathic community likely know Farokh as a brilliant homeopath and teacher of homeopathy, as well as a man with a heart the size of India.  Tho those descriptions may be serious understatements.  I met Farokh in Belgium, and later cemented our friendship in Munich and Greece, where I learned more from him while riding on the back of a motor-scooter, in Greek traffic on twisty island-coast roads than I have from the entirety of homeopathic teachers I’ve had the privilege of meeting over the years.

4 years ago – easy to date, as on our return trip through the airport in Delhi, we were greeted by an enthusiastic gentleman with a lovely Punjabi mustache, on inspecting our U.S. passports giving us 2 vigorous thumbs up, “Obama!”  – our first news of the results of the 2012 election – I attended a homeopathic conference hosted by Farokh, Dr. Barbara (Nath-Wiser) & Spero Latchis, at the Tara Center, in the village of Sidhbari, Kagra district of Himachal-Pradesh, northern India.  The conference itself was amazing, as any of you who know Farokh might imagine.  India met & far surpassed all expectations.

Our flight from Delhi to Dharamshala was cancelled, due to bankruptcy of the regional airline, introducing us quickly to another culture’s understanding of making other plans, gifting us with a night in a Buddhist guest house in Delhi and a 2-day taxi ride via Chandigarh to Sidhbari with amazing food en route.  A friend has described Indian taxi rides as “good opportunities for mantra practice,” and I can wholeheartedly concur.

Now prayer beads or rosaries in the Western tradition were a familiar item for me, along with the western prayers accompanying their use, esp. by the Roman Catholic friends of my youth; but sometimes a familiar phenomenon seen in a foreign culture can bring new meaning or appreciation.  I’d been introduced to Japa practice in a Tibetan Buddhist sangha during my medical residency years, and understood – intellectually at least – the practice, and the fundamental distinction between Buddhist “diety” practice and Western diety worship; in imaging the “diety” before oneself, imaging oneself as the “diety,” and dissolving the illusion of duality or separation.  Witnessing this in practice, as a part of daily life, was quite a different experience.

Curious about the role of the often-seen malas, I found myself perusing some in the gift shop at the Norbulingka Institute for the preservation of Tibetan Culture, a short walk from my lodgings at the Tara Center in Sidhbari; and noted pleasantly that these were commonly made of stones, those things of love from my youth, with which I’d always had an inexplicable connection.  We splurged on a few to bring home, along with some Pashminas, a turquoise & coral-encrusted teapot, and a gorgeous hammered brass singing bowl.

Following some initial miracles with long-distance Reiki (we’ll get around to that, Best Beloved), and with my firewall of skepticism generally broken both from that & from my earlier walk on the edge, my Reiki practitioner suggested some stones to benefit my throat chakra, Vishuddha; I had some appropriate Lapis, aquamarine (a birthstone, and long a favorite following that related lovely golden beryl crystal of my childhood), and blue lace agate; and discovered another essential connection with stones, looking at these friends whether aware or unaware, whether not aware or not unaware, with newfound 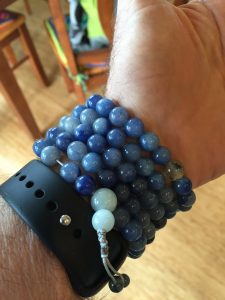 appreciation.  Vishuddha is not all that has been in need of healing, and I began collecting stones in the form of beads, and constructing malas of these for use in devotional practice, as well as for wearing for connection to their elemental existence, constructing these in mindful practice, exercising Vishuddha both vocally & silently in mantra practice in their assembly.  Long drawn to Avalokiteshvara & to Tara, & to expressions of the heart, anahata, stones in green & pink took center stage for me; green & pink “Morganite” beryl, Unakite, jaspers, bloodstones, rose quartz, green Prehnite & aventurine, green kyanite.

Following a backpacking trip into the Obsidian area on the west slope of South Sister, an extinct stratovolcano in the Oregon Cascades (a particularly invigorating trip), waking there at night to witness thousands of rain-moistened chunks of obsidian sparkling in my headlamp & realizing I’d been sleeping over tons of this in a highly renewing night’s sleep, I began incorporating stones supporting the lower chakras – obsidian, black onyxes & agates, deep red garnets, carnelian, blue kyanite, blue & blue/gold tiger eye, some gorgeous dark brown, nearly black petrified wood.

Each one has become my favorite, and Mary gets a chuckle at what my brain appears to have become as I show her the latest & exclaim “I just Love this one!”

I suppose it’s possible to view these as  material attachments, and there is admittedly an appeal in this samsara to the material aspects of existence; my discovery however is principally one of connection, of interbeing with these things whether they be aware or unaware, whether not aware or not unaware; interbeing  through these rock-expressions with the lovely Miss Stewart of 4th grade presence, with my father, my “uncle” Jim, with Avalokita & Tara, with my brave & beatific Reiki practitioner, a very dear old friend now re-encountered; with this Earth beneath my feet and the slow pace of geologic time, which is neither linear, nor does it go around in circles.