My diagnosis was informal, tho strikingly definitive.  I was walking down the hallway on a general medical ward in my 2nd year of medical school, followed closely by an attending rheumatologist (John Bland, M.D.), for whom I later developed enormous respect as a compassionate & capable clinician & teacher, and his entourage of residents, fellows and students – like a cluster of ducklings about their mentor.  “Classic gait” are the words I recall hearing from behind me – referring I now understand  to the lack of motion in my fused sacroiliac joints, the lack of any gluteal activity, and over-involvement of my quadratus lumborum & hamstrings in normal stride, adeptly observed by this master of his art as I was merely going about my rounds ahead of him.  Incidentally, John was Quaker, a graduate of Earlham College (such a woven web!).  I paused and permitted a quick demonstration of Schober’s test – a measuring tape on my back, documenting loss of flexion in the lumbar spine on attempted touching of my toes.  I already knew all too well that my fingertips would not make it past mid-shin; at age 18, 12 years prior, my toes had begun tapping the highbar on stalders, and I could no longer burry my face in my shins on a piked front.  A torn meniscus in my knee and the consequent deconditioning had terminated any further gymnastics aspirations, and my yoga practice had become discouraging and taken a backseat as my flexibility deteriorated.  I suppose it was actually a bit comforting to have a named “condition” to explain my fall from physical capability, rather than consider this to be the result of sloth and lack of dedicated effort.  Further medical workup might have been interesting intellectually, and might have precipitated aggressive medical “management,” with its attended risks as well as benefits; the rheumatologist of my hallway encounter actually discouraged this, using it as a teaching moment to appropriately inform his entourage that history & physical examination are primary in assessment, necessary & often sufficient for diagnosis, prognosis & development of a plan of action; for this, he displayed some photos of the eventualities of succumbing to the disease, and emphasized attention to posture, maintenance of what flexibility I still had, and continued physical activity.  I was a long-distance runner at this point, and had always enjoyed hiking in the mountains & running with my dogs, and these became the mainstays of my treatment.  My rheumatologist, 64 at the time and nowheres near to retiring, was an avid Nordic skier, who had taken up marathon running after a heart attack sustained in a ski race at 59; he was a strong proponent of physical activity in the management of rheumatic diseases, and of health in general, and served as an encouraging mentor, both personally & professionally.  He finally succumbed at age 80, teaching & practicing into his final days.

Ankylosing spondylitis is an autoimmune inflammatory disease, involving inflammation & bony fusion of the articular tissues & ligaments of the axial skeleton, most particularly of the sacroiliac joints, the lumbar & cervical spine, & the sternoclavicular joints.  A common marker is a genetic variant in one of the human leukocyte antigens, known as HLA B27, a variant commonly seen in Native American populations; I have a minor heritage of Seneca,  expressed principally in the shape of my nose, my cheekbones (tho obscured since 1969 by beard and better seen in my sisters), a high instep that has made the fit of hiking and ski boots a challenge, and this autoimmune disease.  I’m not aware of any history of it in my family; however my father was identified as being a valuable tissue donor, having the HLA B27 tissue type, when he provided skin from the sole of his foot to my youngest sister for cleft palate repair, and he frequently donated skin for other such children during my childhood years.

Back & neck pain began to be an issue, episodically, in my early- to mid-30s, likely staved off by my level of activity, efforts to maintain decent posture, practice of Tai Chi picked up for purposes of sanity during my medical residency, and dedication to Bob Anderson’s wonderful book Stretching, which was a Bible in the days of my medical training.  Eventually this evolved from inconvenient stiffness into daily pain.

I became a walking weather station.  I’d been taught, in my medical training, that aggravation of rheumatic disease by weather changes was a myth, but I was a living contradiction to that supposed wisdom.  I could reliably predict oncoming storms 4-6 hours prior to any meteorological signs.  This was a valuable superpower on our family canoe trips every autumn in Maine, but became a mere annoyance following our move to the Pacific Northwest.  Here all one needs for weather prediction is a calendar; in Portland (Oregon), it’s common knowledge that if one cannot see Wy’east (Mt. Hood) in the winter (September-April), that’s because it’s raining; if one can see Wy’east between September & April, that’s because it’s about to rain.

Back pain was severely aggravated following my stroke, while in hospital.  I supposed at first that may have been the result of repeated falls on the fateful day, or perhaps due to inactivity during those early days of confinement to a hospital bed; but with increasing discomfort even as I began to be able to move again, and as the falls of that day became more distant, 10 minutes of online research revealed a tidbit missed by my treating neurologists, who ignored an easily-found observation in their one-sided concern re controlling my blood pressure; Lisinopril, a commonly-used blood pressure medication known as an “ACE inhibitor” (“ACE” = “angiotensin converting enzyme”), exerts its principle physiologic effect by inhibiting the degradation of bradykinin, a significant mediator of inflammation and inflammatory pain; and was severely exacerbating the pain of my disease, as well as the systemic inflammatory disease itself.

Another 30 minutes of research on my laptop using the hospital’s internet connection, revealed that the inflammation of ankylosing spondylitis is not limited strictly to connective tissues of the axial skeleton; there is frequent inflammatory involvement of the endothelial tissues of the cranial arteries as well, and stroke risk is significantly higher in affected folks, due to compromise of the cranial arterial walls.

My blood pressure had been modestly elevated before the stroke.  In ambulance it was quite high, likely as a result of the stroke and perhaps of my traumatic experiences of that day.  Keeping it down was important – but with a medication that might contribute to further weakening of already compromised arterial walls?  One of my mentors in medical school – Larry Weed – told us that medications had no side effects – they may have effects we desire, along with effects we do not desire, but these latter are best not considered to be “on the side” – they are as real, and their presence as predictable, as are the desired effects.  The severe exacerbation of my back pain was not a “side-effect” of a medication, but a very real effect of a medication selected myopically for its desirable effects on blood pressure.

I’d been all-too-aware, as a practicing physician, of how medicine has become fragmented among specialties, with a shortsighted simple-systems-based iatromechanical philosophy suggesting simple linear close-order causal relationships to be sufficient to guide understanding & treatment.  I was now swimming in that great misunderstanding in a very personal way.  Several months later I began to experience Lisinopril’s common “dry cough,” and progressed to sounding like Rod Stewart without the talent or the manager; another effect of this medication.  Struggling with other undesirable effects of other blood pressure medications, and lacking a suitable alternative, I’d remained on this one; fortunately my wife Mary found me a wonderful family doctor, Miles Hassell M.D., who specializes in long-term risk reduction; whose primary interventions consist of a Mediterranean diet and physical exercise; & with those on board I was able to exchange my medication with a low dose of an alternate & get me off the offending agent.

My back pain settled down quite a bit, back to a more manageable pre-stroke level of 6-8 on a 10-point pain scale.

I managed homeopathically with Rhododendron chrysanthemum, the Siberian “snow-rose,” or Bellis perennis, as indicated by the symptoms of the acute flare (dear friends in the homeopathic community, a differential of those remedies in this context would make an interesting study, and we might do that together elsewhere), on an as-needed basis for acute exacerbations; and the bowel nosode Morgan Pure for long-term management.  Along with some excellent craniosacral work.

I woke at 5 a.m., 3 hours before my normal waking time, feeling amazingly good, with the clear sensation of hands working my low back, the tired & sore paraspinals & quadratus lumborum, down deep into the very sore & tender iliosacral angles, all these structures relaxing & without pain for the first time in many years.  Odd, as I was lying on my back at the time, and this continued without interruption when I rolled onto my side, & when I got up for a short walk out to the kitchen.  I immediately recognized those hands, there was no mistaking them,  they belonged to a dear friend living 3,000 miles distant whom I’d not seen for 22 years, and then only briefly since our parting 36 years prior, who had recently had the bravery to reconnect via the small miracle of email.  We’d studied bodywork together in my first year of medical school, Swedish & deep tissue massage & Polarity, practiced on each other frequently, I’d know those hands anywhere.  Hadn’t allowed anyone else to work my back in the intervening 36 years.  The hands that lit my path out of bardo.  I wrote, asked if she’d been sending Reiki, she responded that she’d “only” been holding open a loving space.  2 days later she sent me a long-distance Reiki session.  Lots to relate there, another time; but for here, in that session, soothing warmth deep in my pelvis, deep along the anterior iliosacral ligaments, and full comfort in that region, long a settling place for the pain of the world.

I’ve been fully pain-free since, now 9 months.  SI joints & lumbar & cervical spine have un-fused & returned to full ranges of motion, something rather unheard of in the medical record. 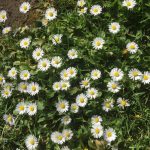 Last April, walking in a city park near home, I was able to reach down, standing, with unbent knees, beyond touching my toes, to pluck some Bellis growing in the grass; this flower I’d previously used to manage my pain, which I’d had to gather on all 4s, no longer needed for that purpose, now “merely” to be admired.

As a licensed medical doctor, I’m not legally permitted to claim cure of an “incurable” disease.  So need “officially” to call this a remarkable long-term remission, tho my heart knows fully otherwise.

On relating this to my current physiatrist, she smiled, held up her cellphone & suggested, “I don’t know how this thing works; but I use it every day.”