The Fall, from this side

There are two stories to tell, which are both distinct and non-distinct from one another, both occurring simultaneously, one in this world and one elsewhere;   Half of my consciousness was firmly in this world, intellectually & perceptually intact.  So that story first, if only to get it out of the way.

Gravity waves from colliding black holes were yet to be detected, but it was 348 years since Newton’s apple (only 21 years since Apple’s Newton, Ron) & gravity was very real that day.  It’d already done a number on my friends Ron & Elizabeth, coming over the coast range on their motorcycle, & if you know that story, oh my …  But they’re tough cookies, and doing well these days.

Mary had left early for a trip backpacking with friends on Mt. Jefferson in the Oregon Cascades, I was home alone with the puppers.

I’d been feeling a bit odd, hard to describe, but started falling on the kitchen floor, my left side giving out, landing always on my left hip, left shoulder & left lateral knee.  After a few of those I was left pretty sore, & decided it might be best to just stay down.  It was a pleasant day, so the back doors were open for the doggies (a friend once described doors as things with dogs on the wrong side of).  My pups – Maggie, a 6-month-old Golden Retriever, and Rosie, a 7 year-old Golden/Bernese Mountain Dog cross – cuddled with me sweetly on the floor; Maggie as a warm cozy bolster for my back, Rosie as my soft & warm pillow.

I was blessed (?) with anosognosia; a big word that is not a thing-in-itself (as no such exist, as we will see, Blessed One), but basically means in medical lexicon “doesn’t have a clue” – no awareness of one’s neurologic deficits; a phenomenon recognized by the neurologist Joseph Babinski in 1914, and a common characteristic, it ends up, of strokes in the region of the brain in which I had my hemorrhage.  So I lay on the floor for 30 hours, I found later; didn’t seem that much time had passed, but time is neither linear nor does it go around in circles.  With my sweet doggies as companions, occasionally trotting outside to pee & chase away the squirrels marauding my grapevines; but mostly cuddling devotedly.  Remarkably, No fear, which still surprises me a bit.  Perhaps a blessing of the phenomenon of anosognosia.  The downside, of course, was no motivation to crawl to the phone, nor to holler to my caring & attentive neighbors for help.

At one point I decided I really needed to pee, tried pulling myself up on the nearby dog crate, crashed & banged my throat on the edge & collided with the floor on that same now excruciatingly tender left hip.  So ended up peeing in a dog bowl, to the infinite amazement of my furry companions.  Then tipped the bowl (my left hand clumsy).  Later, several well-meaning Naturopathic students sent me YouTube videos describing “stroke as a spiritual experience”.  Well more of that as we go along, but at the time, I had trouble accepting that lying on the floor, half paralyzed, in a pool of my own urine, might be a ritual belonging to any religion I’d choose to embrace.  Though I suppose it might beat out crucifixion.

Toward afternoon on the 13th, my son Ben came over to harvest the last of the season’s tomatoes (to my friends in Maine, yes – we actually get ripe tomatoes out here from July to September, with killing frosts waiting often ’till late November).  He hollered in through the open back doors & I hollered back “take all you want.”  I must’ve sounded strange (my speech was rather Parkinsonian, I leaned later, coming out in a rush & flat of affect), & coming from an odd angle, me on the floor, so he came in with his basket of tomatoes, set them down, & said “uh, dad, shouldn’t you be in the hospital?”  Now the thought had struck me, as they have bed-pans there, and little bottle-urinals, & sweet nurses who tuck you in ask “are you comfortable dear?”  But I countered that I Know what they do in those places to folks going through stuff like this, done enough of that to others in my day, & didn’t want a piece of that; I was envisioning cranial angiography.  He called my other son to come by (we’re blessed with two capable & caring sons living within a few blocks) & I tried to negotiate watching how things played out over an hour or two before doing anything rash.  They carried me into bed, got me a glass of milk & a dose of Arnica 30C “for the bruised hip” & surreptitiously phoned for an ambulance.

The ambulance ride is a bit of a blur – My attention, I think, was struggling with which “reality” to remain with.  I recall the neighbor twins, Arley & Boone, standing with my granddaughter Brigit, on the huge broad-leaf maple stump in their front yard, entranced by the ambulance & accompanying firetruck.  The caring & competent ambulance crew, an EMT telling me “you’re having a stroke,” me responding “I think you might be right” & his response “I know I’m right.”  The lights & siren as we headed off.  The ride was short, I recall the painful large-bore IV stick (artfully performed) in my right arm, and the strangely painless backup IV in the left arm, that side apparently devoid of feeling; the 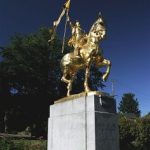 Joan-of-Arc monument in the traffic circle on 39th & Gleason & I think that was a moment of Return to this world, realizing Joan had endured far worse & would have chastised me for cowardliness in the moment.  I have no recollection of the emergency room, but believe the triage there was brief before the hum of the CT & ride up to the ICU.  My CT was displayed on a wall-mounted monitor in my ICU room, and I was able to read it while waiting for the neurologist & neurosurgeon to arrive.  A cotton-ball-sized opacity showing white with fluffy margins, much like a cotton ball really, in the region of my right basal ganglia, with bleeding into the 3rd ventricle; surrounded by a pale halo, edema surrounding the hemorrhage, with compression of the lateral and 3rd ventricles and just a hint of a midline shift.

Didn’t need the attending to tell me that looked bad.  Likely a 25% chance of short-term survival, & very likely a cabbage-like state were I “fortunate” enough to pull through.  Fear for the first time – worry really, about the impact of my certain disabilities on my dear Mary, tho  I got a chuckle reflecting on how artfully she deals with cabbage in the kitchen.  A repeat CT early the following morning, I discover at that time intended for neurosurgical preparations; the halo of edema & swelling resulting in compression of the ventricles & midline shift had resolved, & the neurosurgeon was cheated out of a mortgage payment.  A thanks to my boys for their inadvertent cleverness with the Arnica for that.

There’s more to the this-world story that follows, but that needs to wait for what was happening over on the other side, ‘cause, in this world at least, time appears to be linear and sometimes appears to run around in circles.