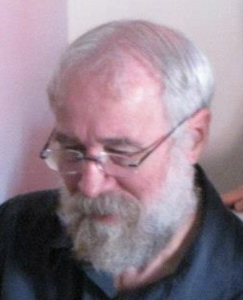 I’ve started this blog, as I wish to tell a story.  It’s a very personal story, & as a rather extreme introvert, I struggle with that, as well as with the concern that it may appear to be self indulgent.  This is a story about me, at least at its surface; tho as Avalokita observed, all Five Skandhas are empty; I as self am empty of individual existence; this is a story of interbeing, as it turns out, my best beloved, the interbeing of all of us, told through the only vehicle I have available, empty as that may be; but that will come out only in the telling.

So sitting at this keyboard, at which I was once so proficient, now with one finger of my right hand tapping the keys, where to begin?  Well, as Lewis Carroll and J.R.R. Tolkien have suggested, the Beginning might be a very good place.

I was born at Deaconess hospital in Milwaukee Wisconsin, in the wee hours of the morning on March  22nd, 1951; a year of the Rabbit; square in Pisces acc. to Vedic astrology, but directly on the Aries/Pisces cusp acc. to Western astrology, born breech, so I suppose Pisces from the waist down & Aries from the waist up, with Aquarius rising over Lake Michigan.  Mars & Mercury in Aries, Moon in Virgo with north node in Pisces, here’s the rest of the chart for those so inclined. 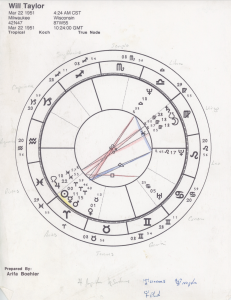 I suppose the astrologers among you could skip most of the rest below & jump right to the conclusion of this story, but then you’d miss the journey, & as the real story is about Here & Back Again, that’d be a bit sad.

I was fortunate to be born into a hopeful & loving family.

My father was perhaps The Most Devoted man to walk the planet, unconditional in his love & regard of all.  My mother was loving, but enculturated to dispense love more conditionally; this may have impacted variously on my siblings, but with my Mars & Mercury in Aries I seemed to play ahead of conditional judgement.  We were – 4 of us – named expectantly for royalty, George Edward, William Frederick, Diana Elizabeth, Margaret.  My William attributed variously to William I, Conquerer, and to Kaiser Wilhelm (I, the senior, with whom I share my birthdate).  & these were the standards we were silently expected to live up to – and did live up to, in my mother’s eyes.  I recall her rage when the town put up a sign on the avenue in front of our house, announcing “Slow children at play;” not HER children, certainly.

We grew up in rural / becoming suburban Wisconsin, North of Milwaukee, nearby to Lake Michigan, & I spent most of my youth outdoors.  On the first day of 1st grade we were to announce to the class what we wanted to be when we grew up, I asserted that I wanted to be an ornithologist, the word sacrificed to 4 missing front teeth.  My teacher – I think Miss Anthropy – told me I didn’t know what that word meant, & I quietly left the classroom, defiantly, taking my Peterson’s Guide with me, subsequently to attend school only until 11 a.m. for most of my grade school years.  My mother, a music teacher working from home,  enabled my resistance much to the chagrin of a series of elementary-school teachers, by providing me with a blank musical staff book, with access to the 2 upright pianos in our living room, & suggested I record the songs of birds in musical notation.  I still have the staff book, with chickadee-dee-dee, scarlet tanager, indigo bunting, Baltimore oriel, eastern bluebird, a variety of sparrows & warblers, the dreaded whip-poor-will (tho I rolled as “Bill” until my college years).  There were lots of places to play, watch birds, fish, collect rocks, in the fields & edges of dairy farms, woods, abandoned limestone quarries, & the shore of the Big Lake (Michigan).  The marvelous Milwaukee museum was a favorite special treat, & I likely provided entertainment to the curators of geology & paleontology with my finds of freshwater muscle pearls & digging-finds of buried chicken bones.

So perhaps I’m getting a bit lost in misinterpreting “the beginning.”  A dear friend of many years ago, Alyson Miller, teaching elementary grades in Amherst Maine, up the Airline road from where I was living in Old Town, observed that “kids these days,” with digital watches & clocks, didn’t realize that time goes around in circles.  Thank you for that, dear Alyson.  Not sure that time goes around in circles, but it certainly is not linear either – so where is “the beginning,” Best Beloved, if events in time – as events in space – are intermeshed & truly interdependent?